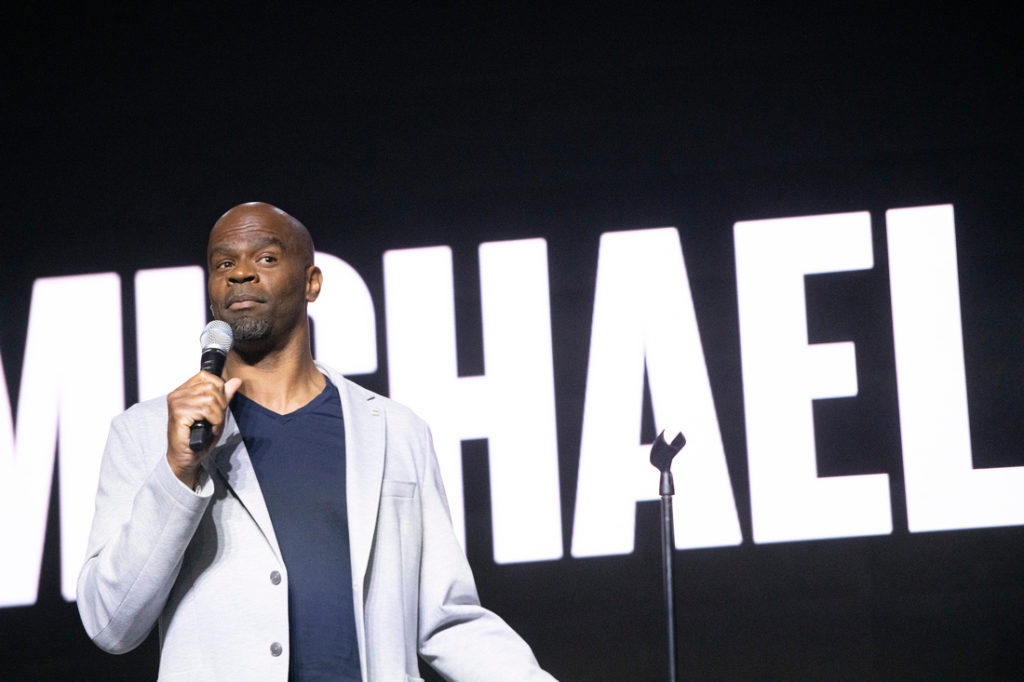 Michael Jr. Shares How to Listen for God Between the Gaps

At the 35th Annual Christian Prayer Lunch, comedian and author Michael Jr. brought his unique brand of inspirational comedy to this year’s event. If you’re familiar with his work, you know that he uses comedy and dynamic storytelling to bring laughter and encouragement to audiences as he inspires others to discover and activate their purpose. During the lunch, Michael Jr. shared the story of how God transformed his life and the ways that we can listen between the gaps for what God is trying to do in our lives.

A lesson in trusting God

One of the inspiring stories that Michael Jr. shared was how God used a heckler at one of his shows to help him go from living in his car in New York City to being able to afford to make the trip to California. To take the next step in his career, he knew he needed to get to California, but he simply couldn’t afford it.

He described his living situation as not making enough money “to live in or leave New York.” Before he was set to travel to Chicago for a show at Zanies Comedy Club, he noticed his car was making a noise. His breaks were bad and needed to be replaced.

The show was set to pay $475, and he needed $450 to replace the breaks in the car. So, he got an advance on the payment for the show and replaced the breaks in his car.

Michael Jr. had started his relationship with Jesus Christ just a month before this, and he said he began to pray the Lord’s Prayer, “Your kingdom come, your will be done …” He said he didn’t fully know what the prayer meant, but he prayed it anyway. He just knew he needed God’s help to be able to make it to California.

The only way he was going to be able to afford gas money to make it to California was by selling his T-shirts, but the T-shirts sold for only $10 each. In the past four shows before this one, he had only sold three shirts. He thought this might be his last comedy show, but he was still praying for a way to get what he needed.

That night at Zanies there were 27 people in the audience. He said he brought a good show, and as he was promoting his T-shirts, a heckler asked how much the shirts were. Michael Jr. replied to the heckler and said, “For you, $50.”

After the show, one woman came up to him and handed him $50 for a shirt, and as Michael Jr. went to get change, the woman said, “You’re so worth it.” He went on to sell 13 T-shirts that night at $50 each.

He knew that God was using that moment to say, “If you trust me, I got you.”

“God used my heckler to get me to where I was supposed to be,” said Michael Jr. “You probably have some hecklers in your life. Your hecklers are sometimes confirmation that you’re going in the right direction.”

Listening between the gaps

He said that when he met Jesus, the question about his routine changed. He started asking himself, “What can I give my audience?”

That change in his perspective changed everything. During the event, he challenged the audience to think about the questions we ask between the gaps.

Similarly, the Apostle Paul challenged the Church at Ephesus, reminding them in Acts 20:32-35 (NIV) of something Jesus said.

“Now I commit you to God and to the word of his grace, which can build you up and give you an inheritance among all those who are sanctified. I have not coveted anyone’s silver or gold or clothing. You yourselves know that these hands of mine have supplied my own needs and the needs of my companions. In everything I did, I showed you that by this kind of hard work we must help the weak, remembering the words the Lord Jesus himself said: ‘It is more blessed to give than to receive.’”

God calls followers of Christ to look for ways to bless others, instead of coveting what we don’t have or seeking our selfish desires.

Michael Jr. compared this idea to telling a joke. In almost every joke, there’s a setup, and then there’s a punchline. The setup is what you receive, and the punchline is what you’re called to deliver, said Michael Jr. “Most people are focused on the setup, so they never deliver the punchline.” To bless others, we need to focus on the “punchline” of what we can give.

So, how can we listen to what God is telling us? Too often, we only want God to speak when we’re worried or when we want something. But God wants us to speak with him and stay connected when things are good and when things are difficult in our lives.

Consider these ways to listen for and distinguish God’s voice in our lives.

Are you open to what God is saying and his guidance? Or are you seeking God for solely selfish reasons? Ask God to give you an open heart to be able to respond faithfully to what he is asking of you.

If hearing God is your only goal, you’re likely ignoring the other aspects of building your relationship with God. Be active in prayer. Spend time in God’s Word. Engage in communities of Christ-followers that help you learn more about who God wants you to be.

It’s important to bring a humble heart to God. “He guides the humble in what is right and teaches them his way” (Psalm 25:9 NIV).

4. Allow the Holy Spirit to renew your mind each day

“Do not conform to the pattern of this world, but be transformed by the renewing of your mind. Then you will be able to test and approve what God’s will is—his good, pleasing and perfect will” (Romans 12:2 NIV). This instruction from the Apostle Paul enables the Holy Spirit to cleanse your mind of things such as false beliefs about who God is, unhealthy feelings of inadequacy before God, and misguided plans that aren’t focusing on the will of God.

5. Create time each day to listen to God’s voice

We see in the book of Psalm that God commands us to “be still and know that I am God” (Psalm 46:10a NIV). In Psalm 37:5-7 (NIV), we read another command from God, “Commit your way to the Lord, trust in him and he will do this: He will make your righteous reward shine like the dawn, your vindication like the noonday sun. Be still before the Lord and wait patiently for him; do not fret when people succeed in their ways, when they carry out their wicked schemes.” Take the time to simply be still before him, watch, and listen for what he is trying to tell you.

Be willing to listen

“See if you can feel the love that’s there. If you can feel it, then you can give it to someone else. But you have to be willing to listen,” said Michael Jr. during this year’s Prayer Lunch.

We have to be willing to listen between the gaps for what God has in store for us.

“My sheep listen to my voice; I know them, and they follow me. I give them eternal life, and they shall never perish; no one will snatch them out of my hand” (John 10:27-28 NIV).

There is an eternal blessing for those that listen to the voice of Jesus and follow him.

To learn more about Michael Jr. or to buy his book, Funny How Life Works, visit michaeljr.com.

PrevPreviousWhy Do Christians Gather Together?
NextWho Should I Pray for?Next

0 replies on “Michael Jr. Shares How to Listen for God Between the Gaps”